Whose Language can we Forget?

The Block on Which We Live. My wife and I were walking around our city block today. It's huge! I estimate that it's over a mile--almost two miles--around the permieter. The block includes a housing neighborhood named Springbrook Meadows, a retirement center, a winery, a bank, a veterinarian hospital, a Ford dealer, a hospital. What did I forget. A medical clinic? Yes. Anything else? Yes, something else: a grassy, green knoll, topped with trees. The knoll offers a view of a chain of hills to the north and east, and a sweeping view out over the Willamette Valley toward the Willamette River and beyond. A neighborhood,a popular golf course, woods. All of that. Beautiful. In the northeastern section of this small town "city block"--behind the parking lots of the Ford dealer and the town hospital--that's the location of the grassy, green knoll. I want to introduce you to what I consider to be an omission on this beautiful and ignored city historic site. A marker on the site raises a question. As I say, we two were walking around the block. On the south side, beside U.S. Highway 99 West,we diverted toward the interior of the block to visit the green knoll. When we arrived at the top of it, we read a notice that the knoll was the site of the house of the town's first postmaster, Sebastian Brutscher. In fact, Sebastian's house on the knoll was the first house south of the Willamette River, which flows in its streambed east-to-west about three miles away. Imagine: Brutscher built a house well back from the river--the site must have seemed 'way out in the woods at that time. Why didn't S. B. stay, like the others of his time, along the banks of the river? Undoubtedly, land was cheaper--maybe free for the taking--further out in the woods. Today, where Brutscher's house foundation once stood, you see a picnic table. By the picnic table is a marker--an upright, white-painted 4 inch by 4 inch wooden post, about 4 feet tall. If you pause before the post you'll notice writing. If you can read English, concentrate on one side; if French, another side; if Spanish, the third side; and if Japanese? (I don't know--just guessing) the fourth side. I concentrated on the English version of a beautiful appeal for world among the the world's peoples. 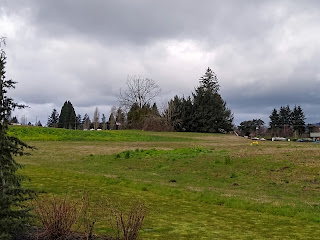 A view of the Brutscher knoll. My question is: why those four languages? If the knoll commemorates Brutscher, why not include his native language--German. Since the knoll lies on land once trod by the Yamel Indians only, why not include the appeal for world peace written in their language? Why honor one component of the "world" and not all components? Especially poignant question in view of the historic pre-eminence of the Indians in this spot. It seems to me that the search for peace would be more effective if all actors were to be included. Peace for some should be peace for all.
Posted by GrowingGreen at 8:07 PM