Voting is an important part of living in a democracy. So "Vote to show God is real."

You might well ask, "Just how does my voting show that God is for real?" For guidance, look to the values expressed in the holy scriptures and saints of your particular faith.

Here's how. List sainted figures of your faith, such as the Buddha, Jesus, Khalil Gibran, Dietrich Bonhoeffer. Saint Francis. Ask: what makes these model human beings unique? By their actions they showed that God is real, but how?  Khalil Gibran spanned religious divides in Lebanon. Bonhoeffer resisted Hitler in Germany. Saint Francis pled for peace in the Holy Land. What we know of the values of our saints can guide us directly in our voting. 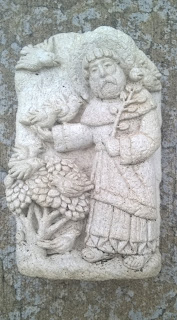 Ask "Well, what did they say/do to convey that God is real?"

They decided to and acted out lives of love.  Especially, they avoided and abhorred hate and evil. The diametrical opposite of the American president, who is trying to get votes by running a pitiful campaign of fear. We are to fear the so-called "caravan" 1,000 miles away in southern Mexico, and therefore to fear immigrants in general.  Who among us is stupid enough to fall for that line?

In our times, voting  as an act of love, true love, confidence that shows that God is real.

A huge V-wing of geese just flew overhead. I watched from my window. I’m glad I could watch watch them, and also glad just to see the oak tree in the yard. Through the very same window I see the intensive care facility located just across the street. I watch ambulance crew and relatives and staff who arrive when needed to care for the sick. People caring for people show that God is for real. 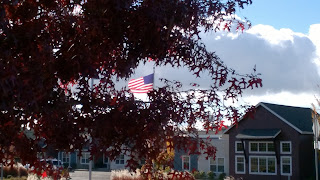 Ordinary human beings, not just saints and emergency crews but you and me--we can show that God is for real.

Politics is a tough vocation. Many politicians by their decisions, their rants, phony tweets, their  outright lies--well, they deny the Ten Commandments, the Beatitudes, the very reality of God. Test your candidates and don't vote for them if they fail the test.


So, do support candidates who will legislate consistently with justice, truth, affordable health care. Who'll  oppose tax cuts that funnel money from poor to the rich. Those who seek to strengthen families, and wish to empower the mid- and lower-income people of our societies.

Look to history and learn how democracies in Europe were hijacked in the 1930s. Start here: watch "Rick Steves: The Story of Fascism in Europe," produced 2018. Perhaps the best available 60-minute recap of the campaigns for fascism.

Conclusion: voting for political candidates is an act of spiritual/religious discernment and stewardship. Vote with your head, your heart, your soul.
Posted by GrowingGreen at 10:10 AM