ACHIEVING LIBERTY AND JUSTICE FOR THE PEOPLE

A class of American high school kids stands to start the school day day, hands over heart, by reciting the pledge allegiance to the Republic—the United States.  They conclude with these wonderful words:

With the class seated, "Very broad terms, very laudable," says teacher. "Let’s focus on one of them: justice."

"And even there, can we limit it a bit more? There are many forms of justice. Today let’s just think about 'economic justice.'”

"We can focus this on sharing the national wealth among citizens. Is the wealth of your nation spread fairly among the citizens of your nation? Among all races, all ages, both sexes, owners and non-owners?", asks the teacher.

She continues: "Another way of thinking of the meaning: all people should have equal opportunity to participate in the national wealth."

"What does equal opportunity mean to you?"

John raises his hand. “It means young and old should have equal opportunity?”

Mary says, “I think it’d mean 'not barred from wealth by sex or race.'”

"Okay, says Teacher. "Now think more about 'economic justice for all.' How is wealth created and distributed justly in a nation?"

John pipes up again: "It means nobody is barred from participation in a nation’s wealth by virtue of age, sex, race I guess."

"Whoa! You agree with Mary. Where’d you two get your ideas?" asks Teacher.

"From the book," John says.

Teacher: "You got it, Birdie. Now, what about educational opportunity and wealth? What about those who are wealthy merely by inheritance? And more complicated yet: what about avoiding unfair taxes? Or achieving taxes fair to all?"

Continuing, she says: "What would Francis Bellamy, author of the phrase 'with liberty and justice', probably say? Right. He’d probably say, ‘I agree with working for taxes fair to all.’” 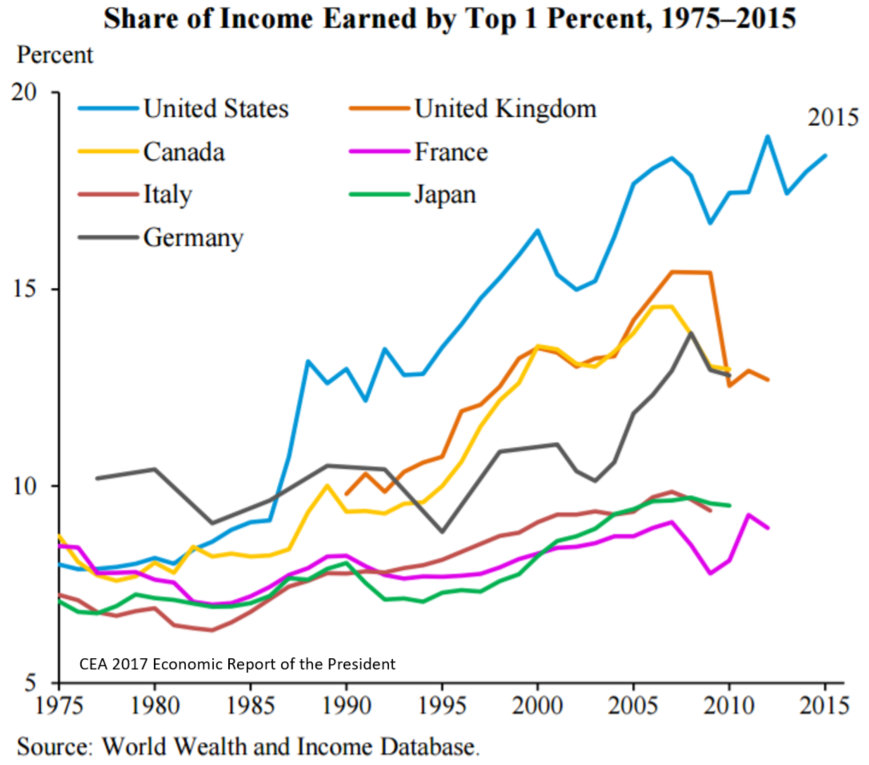 2017 U.S. Council of Economic Advisers
In the public domain.

“Looks like the wealthy get a lot more of the American national income than in any other country,” says John. “Whoa! I never knew that! And the wealthy share is increasing, not decreasing."

“Time’s up for today,” says Teacher. “Take the image home and ask your parents about it. What do they say? We can talk more tomorrow. Class is over. See you tomorrow.”

Teacher has maintained a neutral position. She’s just getting the kids to think about facts about American values the pledge) and realities (the image of wealth in the U.S.) They can discuss whether the fact is good or bad or bad with their families.

What does your family say about wealth acquisition in the U.S.?

I, the blogger, am greatly interested to know what you think about taxation justice in the U.S. in particular. What do you think when you see the homeless crowded into a city park in the shadow of high rise apartments restricted to the wealthy?

Just to share, what I think is that the ancient and modern wisdom writers agree with the Pledge of Allegiance: every nation should arrange wealth distribution so that all can afford food, decent shelter and medical care. It’s a national responsibility to provide that a minimum.

Is that something we Americans can agree upon and work toward? Evidently not. If we did agree, the federal tax plan of 2018 would never have been adopted.

The 2018 tax plan provides lower tax rates for the already-wealthy and less benefit for the ordinary-income taxpayer. Paying off the debt burden will fall to the middle class and below.

Therefore a correction is needed drastically, in 2018 the Year of the People. Every voter should demand of state and national representatives a pledge to provide tax plans that actually provide greater, not lesser, “justice for all.” This effort is totally in keeping with traditional sources of wisdom and with our own pledge of allegiance in the U.S. "With justice for all." Fight for it.
Posted by GrowingGreen at 11:45 AM

Email ThisBlogThis!Share to TwitterShare to FacebookShare to Pinterest
Labels: economic justice, Justice for all, Tax Plan 2018, Year of the People