REJUVENATING YOURSELF BY REMEMBERING OLD EXPERIENCES

Changing locations: I'm imagining you’ve done that a few times. This past week my wife and I did it again. This time we moved from Bethany to Newberg, Oregon, both located within Metropolitan Portland.

Just last night (Friday evening May 11, 2018) about fifty of our new neighbors gathered for a monthly meeting in the community center. Lucy and I were introduced as the newbies.   (Clap, clap.) The chef prepared a gala meal of chicken, locally-grown vegetables and dessert. (Clap, clap, clap!)

Several neighbors had set up displays of items they’d collected or produced. Their amazing arts and crafts ranged from paintings through woodwork and on to quilting. (Clap, clap, clap, clap.)

I recognized one of the featured items that was distinctively West African: a bongo drum. I was surprised to see it.

After supper, the owner of the drum introduced herself to my wife and me. Turns out that she’d served in the first wave of Peace Corps volunteers to Liberia, West Africa, in 1962.

I remember those days so well: President John F. Kennedy: “Ask not what your country can do for you. Ask what you can do for your country.” Hundreds of idealistic young Americans joined Kennedy’s project, the American Peace Corps. Young people spread out across many countries of the world to do good. Our new neighbor was part of that vast wave of service. Our new neighbor and her then-husband were sent to a village in Liberia, near its border with Côte d'Ivoire. 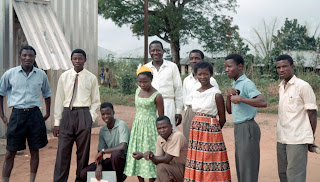 Her experiences in Liberia coincided in many ways with my own early African experiences. My friend and traveling partner, Earle, spent months of 1960-61 in Sierra Leone and Liberia. Read about that here. [Click link] A decade later, my bride and I spent most of a year in Sierra Leone. I was undertaking field research toward a doctorate through Boston University. Lucy and I were hosted by the University of Sierra Leone and by Evangelical United Brethren church members. Memories of that wonderful year are indelible.

So, last night I played a bongo drum (boomp, boomp, pause, pause, boomp, boomp) owned by my neighbor. I was thrilled by several other West African items she’d displayed, and even more to exchange stories of the awakening to West African human cultures. West Africa: like but also so very different from my own West Coast America.

Yes, Africa, you’ve offered me so much on my several sojourns to your shores. I’ve learned a lot from you! I like to think of you as my second country. Thank you!

Readers: how have changes of residence and meeting new neighbors brought back sweet memories? Take time to remember and re-live those days. You may, nay--you will, capture new energy and joy by recalling peak experiences from your past.

Posted by GrowingGreen at 10:39 AM

Darrell & Lucy - I had no idea you had moved...yet once again! Congratulations on your successful integration into your new community of friends. It is a small world and that is proved every day by the people we meet. Your new friend & neighbor with simular travel experiences must have been quite a surprise. I too was in a total state of shock to find out a woman in our Farmington Community Church grew up on the very same street I did in San Mateo Ca in the 50's and we never met...talk about catching up to do. So I can clearly understand your connection with your new neighbors. I am so happy for you and wish you well in your new home.
We are well and hope you are too...Happy Mother's Day to Lucy and your daughter...it's going to be a wonderful day with many memories of our mothers.
Love Katherine
P.S. Fabulous story...I enjoyed it throughly.