Preoccupied during the past week? With what?

All of these events are significant; all grab your attention. Justifiably so.

But what's being overlooked? For myself, I'd say a worsening global environmental crisis, once on the front page of leaders' agendas and now slipped to a lower position.

"Slipped?" Is that accurate? I'd offer "shoved" rather than slipped. The U.S. has a national administration that lives to kill earth-friendly achievements and agreements, including the absolutely vital American Environmental Protection Agency (E.P.A.) Back-sliding rules the political agenda now.

In the Northwestern U.S., my part of the world, we are experiencing unseasonably warm weather this May. That fact preoccupies many: farmers, irrigation water planners, the weather news. The mountains that bisect the region have prematurely lost much of the winter snow pack. Snow-melt is flooding the rivers. A couple of miles from where I write, the normally-lovely Willamette River is at flood stage with snow-melt. The result: flooding now giving way to water shortages during the forthcoming summer. Is it like that wherever else you might live in N. America, N. Europe, N. Asia?

With the U.S. federal administration intent on destroying the very national agency, the E.P.A., that's charged to fight global warming, who's left to fight for common sense measures to secure a better world ahead?

Realistically, my fellows, burden is on you and me.

So, I offer some examples of ordinary people making a difference:

"Clover blossoms," he explained. See the pink in the photo below? These are the very wild clover blossoms he was after. 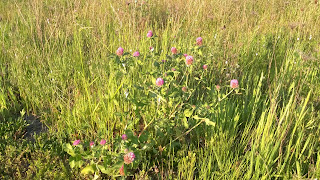 He rambled a bit, then told me, "I want to keep the clover blooming all summer. If I pick blossoms as they appear, the plant will keep producing them. If I don't pick, then fresh blossoms won't appear."

Well, okay I thought. "But why are you concerned?" I asked.

"Because the bees love clover blossoms, and the bees are dying out, especially here in Oregon. I want to help keep the bees fed and alive."

I persisted: "Fantastic! But do you actually use the blossoms?" I asked that because I saw that he was placing what he picked into a large can that he carried. Why not just throw them on the ground? 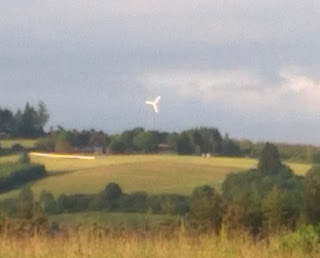 The windmill I saw 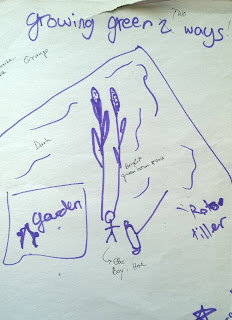 He depicts a home garden, with a rototiller. I'm guessing that the garden in his own family's backyard inspired him. Simple truth: even a small garden can produce food in your backyard. Or find a community garden like the one below. Either way you'll be saving environmental costs of transportation from distant places to your grocery store and table. 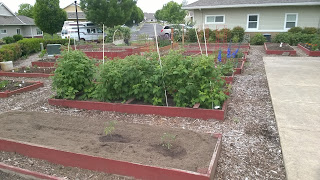 Current example of a neighborhood garden: neighbors tend their own plots

The backyard garden, the clover picker/bee saver, the windmill on the hill far away show that ordinary citizens can take steps to tend the precious earth. Meantime, we support national and international earth-saving policies and programs.

Other ideas? Please share them. Thank you for reading today. New blog next week. Please click on "follower".

Posted by GrowingGreen at 8:36 AM