(Updated October 22, 2017)         It's September 27, 2017. My wife and I visited with two wonderful Presbyterian pastor friends, Dr. Kristina Peterson and Rev. Richard Krajeski, I want to introduce you to their unique earth care strategy in and around Gray, Louisiana and the larger Gulf Coast.

What is Menucha? It's the Presbyterian conference center located near the western boundary of the Columbia River National Scenic Area. (Previously I've posted re. Brother Cyril's positive views on the Scenic Area. Click here to go to the page.)

Kristina's story: Rev. Kristina is a former student of mine at University of Puget Sound, Tacoma. After college she completed more theological training and still later earned a PhD. at University of New Orleans. Now a pastor in Gray, Louisiana, she's recently founded the Lowlander Center, with others such as Rev. Richard Krajeski, her spouse and co-pastor at Gray, LA Presbyterian Church and supporter of the Lowlander Center.

At lunch we learned much from Kristina and Richard. About how the population of Bayou country varies, from original Indians to old French language settlers and on to newcomers such as Vietnamese refugees. About the mix of ethnic cultures that enriches the area.

Kristina and Richard serve a Bayou population with a very urgent practical problem: the land on which they live is disappearing! Disappearing under the waters of the Gulf of Mexico! The Bayou consists mainly of water bodies gently meandering through marshes and wetlands. In recent years the wetlands are eroding and islands of remaining land masses are shrinking. People are moving, involuntarily displaced from once safe island communities. They are resorting, in some cases, to adapting to higher water with elevated housing mounted as much as 20 feet above ground. The Bayou itself is in crisis and so are the home owners. 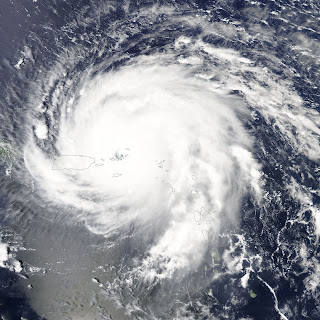 Hurricane Irma gathering strength prior to punching the Bayou. Contrast to beauty in photo above.
September 6, 2017
Photo: NASA photo, in public domain via Wikimedia Commons

Just this year, Hurricanes Harvey and Irma (2017) led to more extensive flooding and many lowlander men, women and children became refugees once again. 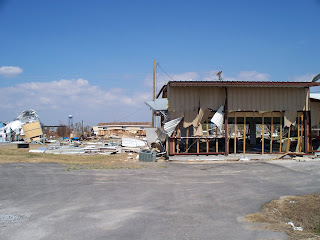 1: Subsistence caused by levees starving the marshes and oil pipelines and extraction leads land to sink into the Gulf.

2: The rising level of powerful storm surges erodes the already-sinking land and kills the former fresh water vegetation and trees, thus destroying the roots that held soil in place.

How much can people and the earth take? What, in this case, is the calling of these two pastors and their congregation? For Kristina and Dick,, it's care for disappearing land and threatened people.
Their story continues. Dr. Kristina and friends have organized a not-for-profit agency specializing in coordinating the flood control efforts around Gray and recovery of communities across the Delta.

Here's how they describe the mission of the Center:

"The work of the Lowlander Center is to help create solutions to living with an ever-changing coastline and land loss while visioning a future that builds capacity and resilience for place and people."

Their immediate concerns include: projects to assist lowlander families in recovering from hurricanes Harvey, Irma and Nate, the blockbuster storms of 2017.

In other communities such as Sierra Leone, West Africa, churches find that helping save land is saving people.

Your financial support is welcome at Lowlander Center. (See the website form for your use). I can vouch for the integrity of the organization.

I rewrote this post on a Sunday morning in October, 2017, and consider it to be my ministry for that day. (Disclosure: I'm an ordained United Methodist clergy-person.) I hope you'll be inspired by the story.

A prayer: ". . .we thank you. . .especially today, for all who are helping in the wake of recent fires, earthquakes, hurricanes, and disasters of our own making."  (From the ritual of Trinity Episcopal Cathedral, October 22, 2017.)
Posted by GrowingGreen at 5:33 PM