Against all common sense, Father's Day had a rough time getting traction in the U.S.

The Roman Catholic Church had celebrated Father's Day throughout their global connection since the 15th century or so, and the Coptic Catholics celebrate it also. But other religions and protestant Christianity did not celebrate Father's Day. 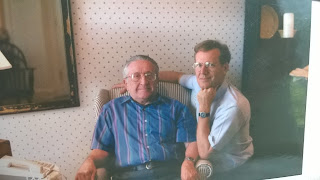 My dad, Clarence, and me

How, then, did it get lodged in our national calendar as a holiday here in the U.S.?

A bit later, a great president, Woodrow Wilson, went to Spokane to announce his attempt to get Congress to approve it as a national holiday. But the feisty Congress rejected the idea, reportedly because it "would be commercialized." Well, of course it would, but was that sufficient reason to oppose Wilson's suggestion?

Given all of that, how can you celebrate the Day with your dad, no matter what nation you're in?

Idea 1: a trip with the family somewhere--wherever you think your dad would like to go. In the city, in the countryside, off to church/synagogue/temple, mosque--you name it. Many religious congregations will speak of their men's ministries on Father's Day, and Catholics, especially, will remember St. Joseph, the father of Jesus.

Idea 2: A personal visit. I'm pictured above with my dad. He was already into Alzheimer's and in assisted living in Tacoma at the time of the photo. He could go nowhere, but my wife and I visited him in his room and said good, appreciative things to him. He enjoyed it; we enjoyed it too.

Congress was right. Father's Day, once official, was commercialized. Not equal to Mother's Day, perhaps. But you don't have to purchase more than a card and a special dessert. Any recognition will be appreciated. That's my experience.

Idea 3: a touching example. On the Sunday after his testimony in Congress, former F.B.I. Director James Comey attended mass with his father and mother in New Jersey. The story and the video are lovely, touching, so human. Comey, dressed very informally, helps his dad navigate the walker up the cement ramp and through the door into the little Catholic church. After mass, James helps his dad toward the car and allows a boy to take a photo of his young friends with Comey. It all seemed so gracious, so normal-American.We can copy James Comey.

Are there great fathers? Joseph, father of Jesus, is undoubtedly one. But there are so many millions of others. Thank God for them all. And Father's Day is celebrated worldwide on various dates. That makes billions of fathers who should be celebrated on the appropriate day in their country.

P.S. Another idea for your use: let Dad in on an activity. For instance, here's my daughter, granddaughter, and me along with the ripe strawberries we picked Friday night, 6/16/2016, at a farm on Sauvie Island, Oregon. It was a privilege for me and my wife to share in that family activity, and just right for father's day weekend.. 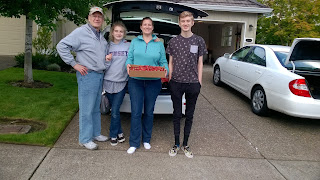 From the Ten Commandments (basic scripture for Jews, Christians and Muslims:) Honor thy father and thy mother.