WHAT A PAIR! AMERICAN FLAGS UNFURLED and a BROKEN- PLATE FEDERAL BUDGET UNWRAPPED

On Thursday my wife, the WORLD'S greatest home baker!, gave me one of her fresh homemade cupcakes on a beautiful plate with a few ounces of “jo” in a cup. (“Jo” is coffee. You know that, right? But Urban Dictionary doesn’t!)

She's good to me! I ate my snack on the patio in the warm morning sun. Beautiful out there! But drat! I DROPPED THE PLATE on the concrete patio floor. Crash! The rim broke, I had to pick up the chips of broken rim crawl back inside to apologize. 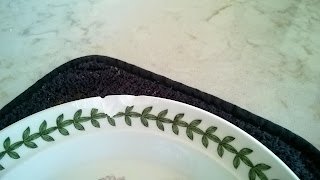 Broken Plate: can you see the chips?

Trump proposes much higher spending on military. The first big break in the rim: how does he propose to pay for that?

In part by taking money away from programs that benefit the poor: Medicaid, health insurance subsidies, schools and education. Those are a few of the huge, inexcusable breaks in the serving plate.
That’s the spending side.

Now look at the income side: taxation. The Pres. proposes cutting income tax rates. Good, at face value! But look closely: the highest income tax brackets will get the biggest cut. The richest, like the Trumps, benefit more than middle and lower income folks from the tax breaks. The budget’s really a sleight of hand transfer of wealth from poor to rich!

To even up income and expenses, Trump promises a jump to 3.5% annual growth rate of national productivity rate. If that would last over several years it could offset the losses from tax cuts to some extent.

According to analysts, the national economy grows at about 1.6% per year.

3.5% productivity growth just isn’t in the cards even granting that Trump’s infrastructure spending plan will juice the growth rate somewhat.

3.5% growth and increased revenue will require higher national debt and pump the rate of inflation.

The Trump budget doesn’t add up without assuming the impossible.

So Trump will supplement tax income with debt. "Don't forget, I'm the King of Debt," he once proclaimed. "I love debt. I love playing with it."

Yes, you'll play with debt owed by us, the people--debt that will burden our children and grandchildren during their lifetimes? That’s more than a chip in the plate; it’s an outright crack!

Trump knows he has to make shifts on the expense side of the budget so he also proposes gutting valued federal programs. Humanities (literature, culture and history) proposed for discard  are the source documents for American values. Health programs for the poor are on the block too. I was a professor in a humanities department. I experienced humanities programs and even ran some that benefited not just students in the university but the surrounding community too. 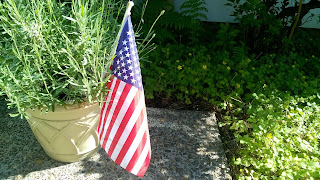 Flying the flag in a simple garden

Pope John XXIII wrote: ". . .the attainment of the common good is the purpose of public authority.” (Pacem in Terris,” 1963.) The Trump budget totally misses the target. Instead, it aims at the good for the richest few at the expense of the rest.

It’s up to us—all of us—to express ourselves. We want a budget that’s realistic about future economic growth, that does not increase the national debt, does prioritize the poor, and isn’t offered on a broken plate.

Telephone your representatives. A phone call is better than an email or a letter. Message: “No broken-plate-federal-budget!”. Get his/her telephone number here: Directory of Representatives. Senators. 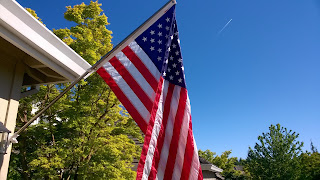 Flying the flag in view of passers-by


P.S. Monday, May 29th, is Veteran’s Day. If you’re American, fly your flag with thanks to vets in mind. The Vet-friendly federal budget would prioritize modernizing the Veterans Administration and its health system above other military expenses: weapons, shipyards.

Life is a process. Return next week for a post on what a forward-looking federal budget for America would look like.
Posted by GrowingGreen at 5:39 PM