St. Francis of Assissi is known as patron saint of the animals and the environment. (Source: https://en.wikipedia.org/wiki/Francis_of_Assisi.)

Why did the present pope taken the name, Francis? Don’t get me wrong. I was thrilled when he made that choice upon his election. St. Francis (13th century) lived out great values, of special interest to anyone in the modern Green movement.

A few facts. St. Francis (13th century) lived out great values. He left Italy and crossed the sea to visit the Sultan in Egypt. The Sultan was the top Muslim official in the world. Francis’ goal was admirable: to get an agreement that would stop the fighting between Christian and Muslim armies during the crusades. He failed to reach his goal, but he tried. Will the current Francis, the pope, make a similar journey and plea? 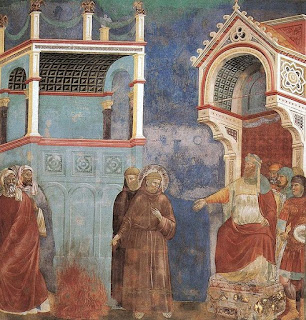 Saint Francis before the Sultan. Giotto. In the public domain. Source: Wikipedia.

Old St. Francis reached out to beggars, laborers and people of every other social class. And animals.

Do you have a pet? St. Francis befriended birds—he’s often depicted with a song bird on his shoulder. And other animals. It’s said that he knelt before a raging lion to pull a thorn from its paw.

The old medieval saint might say, “I’m honored, son. But tell me: why did it take nine hundred years for a pope to take my name?”

Pope Francis could say, “Ah, you know. The office of pope is very political, enmeshed in Vatican affairs. You were not really a political power in Church affairs. You were an outsider to Rome. You built peace and justice movements. Your name may not be all that welcome in the halls of power.”

The old Saint Francis might say, “Say, weren’t you an insider? But why, then, did you take the name of an outsider?”

“You’re right. I’m an outsider too. I haven’t been around Rome too much. I’ve spent my time across the seas, far from Rome. Insiders think of me as an outsider even now, and I cultivate that reputation by living apart, in a little apartment away from the papal palace.”

“But you are an insider, or you wouldn’t have been elected Pope!”

“In name and title, I’m an insider. But I think of myself as a liberation theologian. That’s my training and it’s been my commitment. And believe me, that makes me an outsider.”

“Well,” said Saint Francis, lighting up like clouds in the sunset, “I get the meaning of liber. It has something to do with freeing, or freedom.

“Yes. A way of thinking that promotes a life of acting for justice and liberty,” said Pope Francis.
“Buona!”, said the old St. Francis. “And if it would help with the freeing of people from poverty, illness, war and famine, I hope many popes in the future will take the name Francis. Let there be one of them each century, starting with you.”

He continued, “Now befriend the Americanos this week—from the poor to the President. Peace and power be with you, my son. Oh, and don’t forget the environment too.”
Posted by GrowingGreen at 9:26 AM