Meet a Prophet for Today, the Rev. Dr. Kristina Peterson, a multi-disciplinary pastor and social leader in the lush Louisiana Delta area.

Kristina studied at the University of Puget Sound in the 1970s, and as a prof. there I was blessed to know her. Her commitments interested me: she already had spent time in the ‘60s registering rural Black voters in South Carolina.

Now, Kristina serves as an ordained presbyter and leader of First Presbyterian Church of Bayou Blue, Louisiana, and much more. (In the linked photo, you’ll see some of the congregation, the interior of the church, and her husband, the Rev. Dick Krajeski, leading the congregation.)

Last week, University of Puget Sound sent its Spring alumni magazine, “Arches,” to me in Portland. My wife, Lucy, read it before me. She brought the magazine to me, “Have you seen this article about Kristina Peterson?” Kristina and Dick had visited us in Portland last summer. Lucy knew that I’d love the article.

"No, I haven't seen it. I want to read it right now." It provided  a great update on Kristina's concerns and activities in Louisiana. You, too, can read it by clicking this link.

Jumping back a decade to 2005, I received a letter from David Gladstone, Ph.D., a professor at University of New Orleans. He requested a letter of recommendation for Kristina, who was applying to the doctoral program in Community and Urban Planning. I was proud to endorse her academic qualifications and rated her at the top of the range in social issues, social values, and social change. Kristina entered and completed the program, emerging with the Ph.D., thereby capping the master's degree she'd previously earned at United Theological Seminary in Dayton, Ohio.

She gained academic credentials that would help her enormously in her growing concern about the sinking of the land in the Delta. Kristina was right in the middle of an environmental mess. Land around the delta was and is now disappearing under the waters of the gulf. This will continue unless and until correctives are applied.

When Kristina stands in any of many locations around her parish, she can survey the landscape and see only a vast sheet of water where dry land stood “just one week ago.” It’s like the tide has come in, only it’s permanent.  Not just ebb and flow. 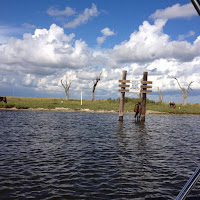 She’s told me that the cause is not merely deficient diking, but rather, the actual sinking of the land level due to oil extraction. That's a primary cause among other factors.

In ”Arches,” she's quoted as saying, “Every 40 minutes we lose a football field’s worth to salt water intrusion.”

“Ah,” I think as I read her words, “so my drive from Portland to Tri-Cities could be responsible for land loss in Louisiana?” I have to think hard about my driving habits."

In addition to her immediate pastoral work, Kristina reaches out to help communities affected by land loss: Native American tribes, white and black communities, and people employed in fisheries. She works through several organizations, including the national Presbyterian Church, U.S.A. Church World Service, and local agencies and movements in Louisiana.

I asked her for pictures to post so that you can see for yourself. The photos document the waters of the gulf washing over acres that were land just a week or two ago. That’s the shocking story in the delta. 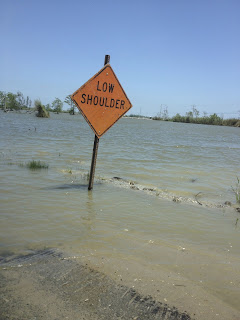 Kristina, speaking prophetically, is quoted in “Arches” saying, “This place [the Delta] is a harbinger of what’s to come.” She means what’s to come for where you and me. She’s talking about the ports of Los Angeles, Seattle and Tacoma; some of the streets and avenues in lower Manhattan, New York City; possibly the diked lands in Holland, and all other low-lying spots around the world: parts of Bangladesh for example. That’s truly prophetic. Are the policy leaders, politicians and voters around the world getting the message? 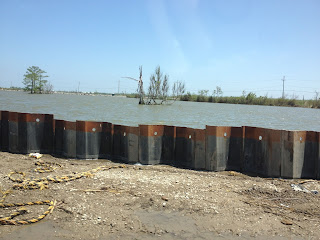 As I’m searching my email for incoming mail from Kristina I open a message from Sojourners, an organization headed by the equally prophetic Jim Wallis. The email is from Jim, notifying his email list that "Next week, Pope Francis is scheduled to release. . .his eagerly anticipated encyclical (authoritative teaching document) on the environment."

Travel tip for Pope Francis: when you visit the U.S., travel to the Delta and put your finger in the dike." Support the Native American groups, including many Roman Catholics, who are losing their land.)

Look for and cheer the encyclical, and pray that Pope Francis’ message will boost and help Kristina Peterson and the army of volunteers everywhere that are fighting to raise environmental priorities higher, to save the Delta and to make planet Earth a habitat that our children’s children can enjoy.

If you want to help the people of the Delta directly you may consider donating to Kristina’s suggested not-for-profit the Lowlander Center: Supporting Lowland People and Places through Education, Advocacy and Applied Research.

Posted by GrowingGreen at 6:57 PM