Scott Galloway writes to the young, the bright and the hopeful. About their immediate future amidst "The Four:" Amazon, Apple, Facebook, Google. It's the global economic future that's upon us and affects us all.

A useful book about the change of times! You'll see. But Galloway sullies the book with over-the-top use of four letter words. That's sort of sickening to a reader like me. I guess it's his device to market to and hook a certain audience.

But, well, Galloway is no saint, no theologian, but more like a prophet (and they communicated colorfully too.) Galloway's a marketer, oriented to sell. Apparently he concludes that dirty language sells.

Skip all that and let's go on to the meat: Galloway really does dissect "The Hidden DNA of Amazon, Apple, Facebook, and Google." He emerges from dissection with conclusions about these behemoths that we all need to understand. "All" meaning the millennials especially, but all others too.

A great example: in his final forty pages he identifies four assets a young person needs to sell one's skills to the high paying, talent-driven and global-reaching Four.

As Galloway points out, The Four pay in huge dollops but employ relatively few. The Four know how to make money and redistribute it to their highly talented workforce. A vast reach and relatively low business expense leads to big wealth. 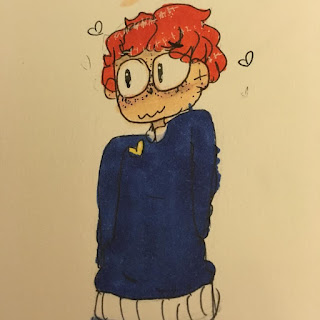 Will Nikki master Algorithms
and break into a Big Four job?

Abigail Prior, artist
Used with permission


So here it is: You are your product. Here are the four things you need to sell yourself to the Four Giants.


I find Scott's ideas on the digital society to be mind-opening. Business people, laborers, professionals young and old, do it. Read The Four--yes--but also church leaders, human rights advocates, political party leaders. Any and all will benefit. No one can lose by reading this book.

Conclusion: your talents are your product. Learn how to sell yourself to the Four Giants of the Earth.

P.S. The book raises a host of issues for me.

Posted by GrowingGreen at 8:29 PM