That's the age of Timberline Lodge, Mt. Hood, Oregon. For all of these years it's been a favorite of mountaineers and day trippers, diners and overnighters, skiers and hikers.

The lodge sits at just under 5,000 feet elevation on the south side of the 11,249 foot peak. This means that it is blasted throughout the winter by the snowstorms that blow in on southwest winds from the Pacific Ocean, about 150 miles to the west.

The photo shows the lodge virtually buried by snow. The white stuff reaches its maximum depth, normally, in April of every year. The maximum snowpack at the lodge can run from 16 to 20 feet.

My own family of four stayed overnight several years ago. The kids sledded and cross-country skied and swam. The adults stayed indoors. Overnight the snow fell like crazy and--guess what?--we were snowed in! No vehicles left the lodge until the snow plow arrived.

A sadness for many Hood aficionados arises from the fact that the snow levels are decreasing and the dozen glaciers on the mountain are shrinking annually. In 2016 the snow pack was under 3.5 feet at the lodge. 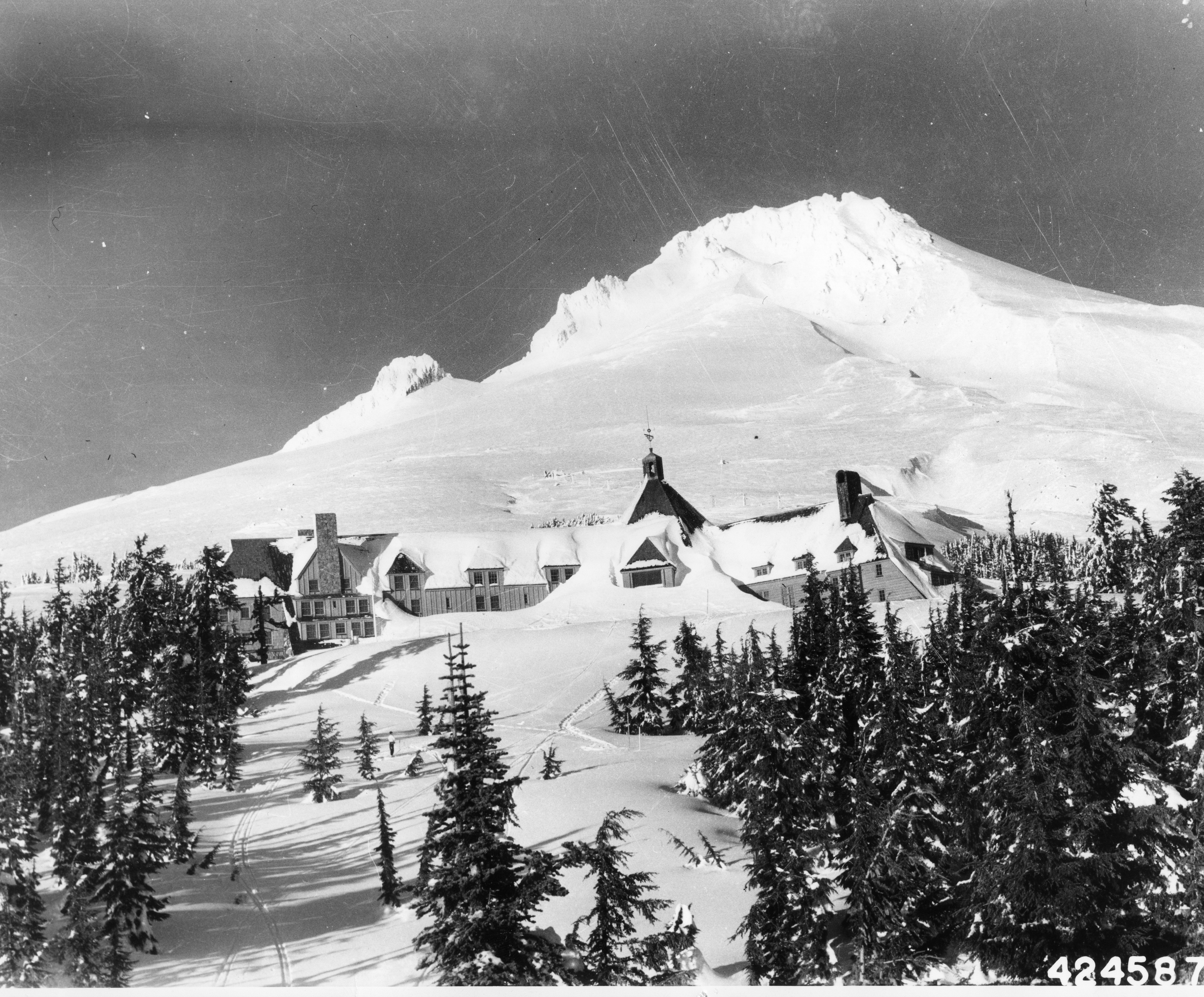 Photo courtesy of U.S. Forest Service via Wikipedia.
In the public domain

The date of the lodge goes back to the Great Depression and the Works Progress Administration, under one of the great U.S. Presidents, Franklin Delano Roosevelt. Roosevelt himself arrived on September 28, 1937, with an entourage of 90-some dignitaries. He wanted personally to dedicate the lodge.

In the construction itself, great hand-hewn foundation stones were moved into position by laborers. Enormous wooden beams were hewn from the native fir trees. In later years an out-of-doors swimming pool was added. It's entirely possible to ski during the day and relax in the heated pool in the evening. 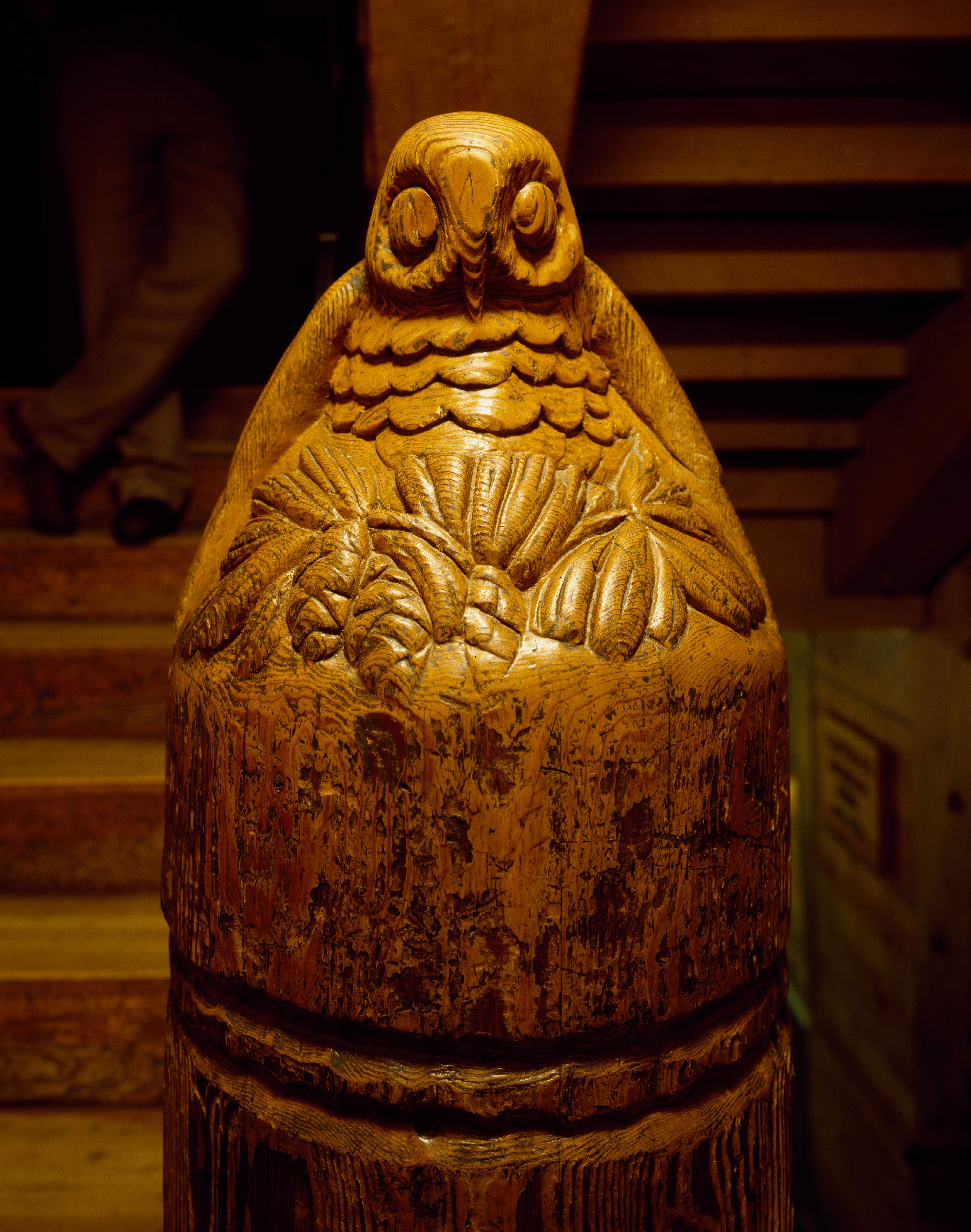 Above: an example of the intricate yet woodsy construction. "Purchased for $2.10 each, discarded cedar utility poles were repurposed as newel posts—19 of them crowned with        carvings of area wildlife."  Photo from Library of Congress Carol M. Highsmith Archive collection via Wikipedia. In the public domain.

On a clear summer day, under blue skies, you can stand on the south-facing stone portico and look down the chain of Cascade Mountains stretching on for miles to the south. Three Sisters, Black Butte, and on even to Mount Shasta in Northern California. Looking southeast you see the plateau of golden wheat land in eastern central Oregon, and uncounted buttes and peaks stretching off toward Idaho and Nevada. You can imagine launching yourself on a hang glider and ending up in the Deschutes River, fifty-some miles to the east. It's one spectacular view!

Dining in the lodge. The lodge restaurant menu items are limited but promise high quality cuisine. A couple of weeks ago the prices were too elevated for me. I went down the road.

The lodge has stood there in wind, rain and snow for eighty years! And, if Hood can avoid erupting and other factors remain equal, this treasured building can last for another eighty years. I commend The Forest Service, on whose land the lodge sits, for the careful management and stewardship it's given to the lodge and to the national forests in the Pacific Northwest

May the public-minded spirit of  Franklin Delano Roosevelt live on in the historical consciousness of these United States of America for all the years to come. Decades and decades.

To participate in the anniversary you may share the post by licking on any or all share button below. Thanks for reading blogs, and come back to this one next weekend.


Posted by GrowingGreen at 8:35 PM

Darrell, I really appreciate your post of the Timberline Lodge. Your narrative is highly informative and rewhets my appetite for going back there. Once is clearly not enough!

Not sure why and how the website identified me as Grandpa Jim! Even though I surely respond to that fond title when addressed by my grandchildren!
Jim Davis