NEW and OLD // YEARS and GENERATIONS

THE OLD YEAR / THE NEW YEAR.  THE GENERATIONS

The old and the new roll on. Like waves of the sea they sometimes overtake each other as they bunch up before breaking on the shoreline.

Years are like this. So are the generations of people.

In the pic below you'll see Sae Ah Reeck and me. She was visiting me that day (December 30, 2016) for the first time. I'm the eldest Reeck in my particular lineage and she's the youngest.

What was intriguing to me was how well she was walking and balancing.

She'd learned to communicate too! She doesn't talk yet, but she employed other devices. Her parents (my nephew and his spouse) placed her on the floor and opened her little box of play blocks. What did she do? She started relating to me by giving me her blocks! Within minutes I had several blocks. 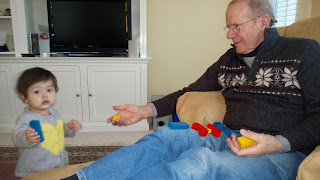 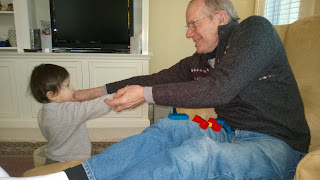 Sae communicated volumes of love and affection without saying a word. And trust, too. How had she learned about giving?

Undoubtedly she'd had plenty of examples of giving. Her parents give food and care to her every single day. Guests arrive and bring flowers as a gift for the hostess. Christmas had just passed and she'd received some gifts.

However, her giving of her these blocks seemed beyond copying what she'd seen. It was totally unselfconscious and mysteriously biological, like some certain giving gene had been imbedded in her.


If you've been around kids this age you're undoubtedly aware of how quickly they learn. Sae has a lot to learn in the few years before she becomes accountable, but she's certainly mastered the means to establishing a strong relationship with a total stranger.

Their wave will crest and crash on the shore and leave its unique mark on the world.  I wish Sae and all the members of the younger generation all the best in 2016 and throughout their lifetimes. We wish children a better life than our own. Perhaps they'll have obtain it, not through grasping for things and defending them but through giving.

Posted by GrowingGreen at 3:24 PM