Since today, October 17, is Caturday, I’ll say a few things about the cats I’ve known.

I’m a dog guy myself. Maybe that’s why Chloe doesn’t love me. But how does she know?
And who is Chloe?

Chloe is a Bengal cat whom I see at least twice a week. We should be able to relate. We know each other, that's for sure.

Chloe is sixteen years old (she celebrated her birthday last week)—a true senior citizen of the domestic cat world. Chloe is a dead ringer for the cat in the photo.

I asked my grandson, who’s younger than Chloe and with whom Chloe resides: “How would you like Chloe to be remembered?”

“Maybe I didn’t catch that. What did you say?”

“Annoying!” he replied. “She meows so loud.”

When  I go to Chloe’s house after she’s been alone for a day, she’ll shout “Meow!” at me and lead me at a stately walking pace through three entire rooms to the bathroom sink. She jumps 36” from the floor onto the counter and waits for me to turn on the cold water faucet. My wife has had the same experience with Chloe many times. Chloe leads us around from the entryway to water. And to cat food.

These days, that’s about all the attention I get from Chloe. Once she’s had her three or four minutes of drinking running water she’s off on her own business, which is usually sleeping on a cushion or pillow, and I’m relegated back to the computer.

“Chloe,” I shout, “It didn’t used to be this way between us. Can’t you remember when you’d just wait for me to jiggle a lure so that you could ambush it from across the room?”

No response. Chloe’s psychology doesn’t mesh with mine anymore.

So now, when I experience this rejection, I think of other cats. My mother loved cats and perhaps they loved her back. I’m not sure of that.

As a teenager, when I was still living with my parents, my mother had moved up the scale by buying a Siamese cat to replace the ordinary cat that died.

I’ll admit that the Siamese was beautiful. She looked like this trophy winner: 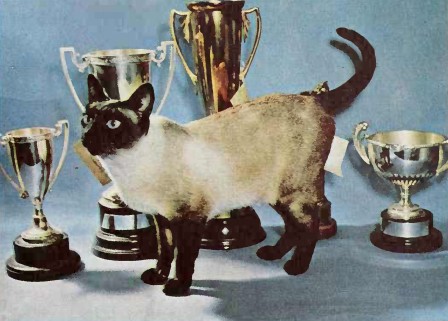 Terrifying, too. The family telephone was located by the kitchen window, in a direct line of sight from the from room sofa. The cat normally slept calmly on the back of the sofa looking out of the picture window toward the Tacoma Narrows and the Olympic Mountains. The sun shone in that window. The cat liked the warmth.

However, when my mother talked on the phone, she often looked out of the kitchen windows toward the back yard vegetable garden. Concentrating on the phone call, she didn’t hear the Siamese cat rushing toward her. Once in range, the cat lifted off the ground in a huge leap and landed squarely on my mother’s back. Did the cat mistake her for a big mouse? This happened to me also one day, but only once. The cat did not learn better behavior, but I did.

Dogs seem to have an entirely different psyche. They bond with their owners. The two cats I’ve known best haven’t loved me, but my dogs surely did. What’s the difference? Perhaps cats have come in from the wild more recently than dogs. There's a difference between loving another as an end in itself, and like the other because of its usefulness. Cats are capable of a utilitarian relationship with a human, but are they capable of a love relationship with a human being? That's my question.

Cats, despite their aloof stance, beautify the world and do some good things (chasing mice.)


Does your cat relate well to you? Love you, even? Tell me about it.
Posted by GrowingGreen at 4:26 PM