WATER OVER THE DAM: conserving in a summer of drought As a kid, water was never a source of serious concern to me. I grew up in the temperate climate of Puget Sound, an inlet of the North Pacific Ocean. On the mountains and hills around grew vast temperate rain forests.

My father, Clarence, often described our Pacific Northwest water cycle to me. Clouds formed over the ocean, blew onshore, and dumped their rain and snow on hills and mountains. Lakes and rivers formed, the water returned to the ocean, and the big roundtrip restarted itself.

My only concern about water was how to stay dry. I had moss growing between my toes!

In the 1970s, Donella and Dennis Meadows wrote of the Limits to Growth. By that time I was teaching, and I used the book religiously in my religious ethics course at University of Puget Sound. The message was that exponential population and economic growth were pushing earth’s resources right up to the breaking point. They urged readers to think of themselves as careful users of the commons. It made moral sense.

About that time, my daughter came back from an overnight at her friend's parents' cabin on the Olympic Peninsula. They were experiencing a water shortage; their well was at risk of going dry. Christina reported the wording of a sign in the bathroom: if it's brown, flush it down. If it's yellow, let it mellow. "Ha ha." We all laughed. But I thought our family was safe because we were on the municipal water supply of the City of Tacoma. 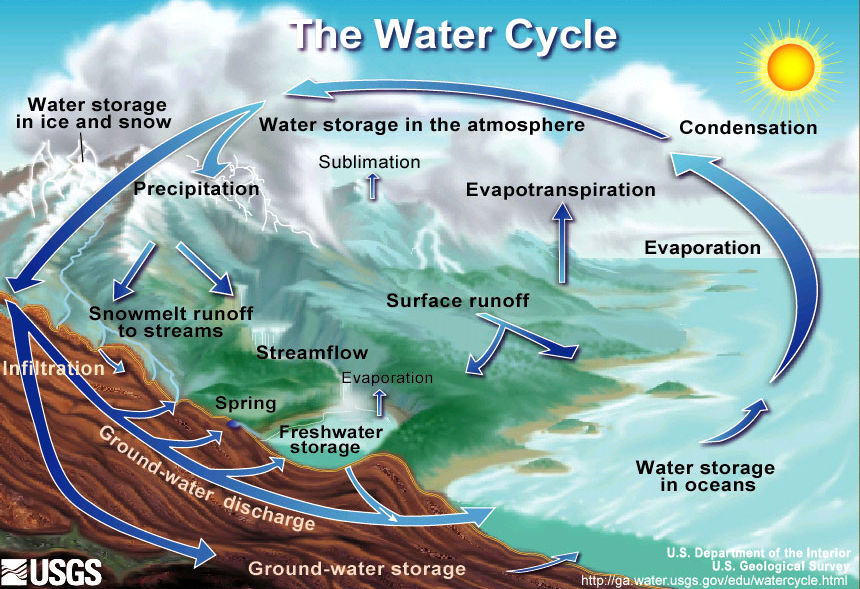 Now jump to 2015. The headlines proclaim water shortages in California. Oregon is short on water for agriculture this year. The governor of Washington State declared a drought emergency. And, according to the federal U.S. Environmental Protection Agency, the communities of our nation and all the world confront a shortage of water available for human use.

Suddenly I find myself re-thinking Limits to Growth in relation to water available for our homes and farms. Water shortages relate to the increasing human community, from 3 billion         when the Meadows wrote to 7 billion now, which projects to 9 billion by around 2050.

Individuals and communities can become smarter users of water. A decade ago, members of the adult Sunday school class at Urban Grace Church in Tacoma, WA considered their Christian stewardship of resources. They invited an outreach officer from a Pierce County utility to speak on water shortages. She left us with such good tips about water usage. Well, I was pleased with that, of course. I began a new phase of life with respect to the demand I placed on my water providers. I found a few tricks for using less water.

Some tips: use efficient showerheads. I immediately tried one and it worked well. But if you really like your old shower head and don't want to give it up, try using it at half of full volume.

The outreach worker speaking at Urban Grace gave an environmentally responsible bathing tip from Japan. There, according to her, bathers turn on the shower for an initial rinse. Then they turn off the shower to lather themselves with soap. They turn the shower back on for a final quick rinse.

There are far more tips available from your water and electricity utility as well as on the website of the WaterSense program of the EPA.

The Rev. John Wesley provide the spiritual basis for understanding ourselves as good stewards. (A link to his Sermon 51 on stewardship.) It’s up to us to use our intelligence to become better stewards of a common resource: water. Spiritually speaking, you’re a steward of the commons, so use your ingenuity this summer of water shortage. How many gallons or liters of water can you save with  common sense control of your water usage?

Posted by GrowingGreen at 11:32 AM